Flash was found by a kind pipeline work crew working in the Grande Prairie area. Going door to door, they were unsuccessful in finding his owners, so as work continued and the crew kept moving for several weeks, Flash followed them. As they were making plans to have him transferred to SCARS at the conclusion of the job, the crew arrived at the work site one morning to find Flash had brought a friend with him. Yokohama, as the crew had named her, was discovered to have severe burns to her legs. Wasting no time, they took both dogs to receive immediate vet care and bought them new beds and new collars for their fresh start.

Now they have also donated the funds to cover the remaining vet care that was needed, totaling more than $1600.  Thank you to the employees of Surerus-Murphy in Hythe!! 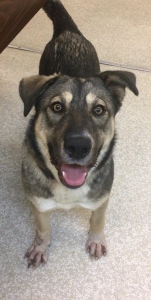 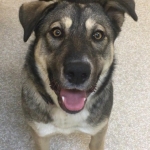