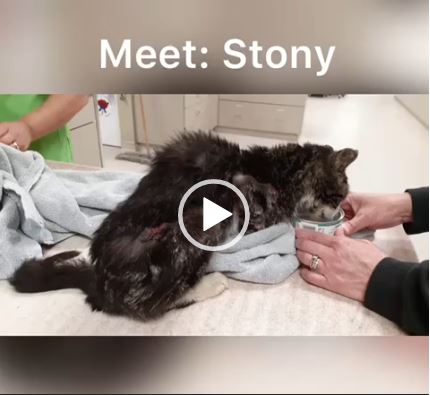 Animal lovers, we want to introduce you to a fighter… This is Stony!

Stony was named after the town where he was found. The name suits him due to his resilience and determination. He was found in a ditch by a local peace officer on September 19, and brought into a local vet clinic where a SCARS foster volunteer happens to be employed. When the clinic staff received this sad being, they all looked at each other and thought, “This is not going to end well”.

It was estimated that he was at least a year old, but they could not be certain due to his abhorrent condition. His fur was filthy, chunks of it were missing all over his body, he was extremely greasy and, was (this cannot be stated clearly enough) a bag of bones.

Gently placing him on a scale, they found he was a mere 1,700 grams. That is approximately the weight of a four- to five-month-old kitten.

While performing a very gentle physical exam, they picked him up to look at his belly, and the shock continued. His chest, abdominal and genital areas were covered with open sores, with pus oozing from them. He was so scared and sore. They tried hard not to make him feel any worse, but this tough little guy let them continue without complaint. With his sorry state, euthanasia was believed to be the best course of action. However, the SCARS volunteer suggested that, “If he is willing to fight for his life, then we need to fight for him too.” And, thus began his journey back from death. They found a quiet place to put him, gave him some food, water and litter, and let him rest.

Not knowing his history, the best guess was that he had gotten himself locked in a building and was not able to get out or to find anything to eat or drink. By the looks of him, it was thought that he was trapped for at least six weeks. Every morning, the vet staff would arrive and look in on him, not knowing what they would find. Every morning he was still being. Day after day, his appetite improved. He was given antibiotics and pain management, and he tolerated it all. Over the next several weeks, he sat quietly in his cage, resting and gaining weight. Amazingly, all his blood work came back within normal parameters, including liver and kidney values. He was even given SNAP tests for disease identification and, again, he passed with flying colors. As stated, this guy is a fighter.

He is now about the twice the size as when he was first found. He is eating very well, but is still in pain due to unknown injuries he had suffered.

Unfortunately, SCARS could write a book on cases such as Stony. This guy is a fighter, and if anyone is worthy of a second chance, it is Stony. We are asking for all the animal loving people in our community to fight for him too. Stony still has medical issues to resolve, weight to gain and trust to build. This will not happen quickly or without cost. If you would be willing to help with his ongoing medical bills, food, litter and medication, we will make every effort to rebuild Stony into the cat we know he can be and then find him the best possible family so he can live out his life in comfort and peace.

The SCARS family will not let him down and we are confident our SCARS supporters feel the same way! ❤️