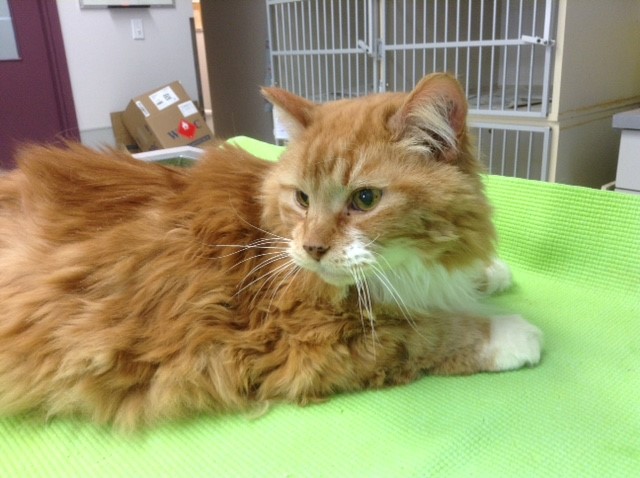 On April 30, 2020, sanctuary cat, Freddy, passed. Here is the story from his foster family.

He was 15 years old. Freddy came to SCARS in 2016 when his elderly owner was no longer able to care for him. Freddy was 11 years old when he came into our family in November 2016. He was diabetic so required a little extra care and attention. In 2018, he developed lymphoma and had a lymph node removed. He recovered well and at that time he was designated a sanctuary cat.

Freddy was a big, gentle, fluffy ginger and white cat. He was always cooperative getting his insulin which was twice a day. He was very timid when he first came to us. It took a while for him to become friends with our cats but he found his place with them. He even tolerated the dogs who came to live with us. He just never really took to humans and preferred to avoid them except for his special ones. He liked to cuddle on his terms, particularly lying on your chest and staring into your face. He was very particular about his meal times and would announce very loudly when it was food time. If it was late there would be a loud cat scolding.
Freddy’s health deteriorated very quickly the week before he died. Usually bright and an enthusiastic eater he barely ate, drank very little water and was very lethargic. He did not respond to treatment.

I am sad to say good-bye to Freddy, but I was fortunate to have had him in my life and to have had the privilege of making his final years loving and comfortable. A special thanks to SCARS, their volunteers, Freddy’s sponsors, the vets and the techs who cared for him over the past years for being a part of his journey and making it easier.