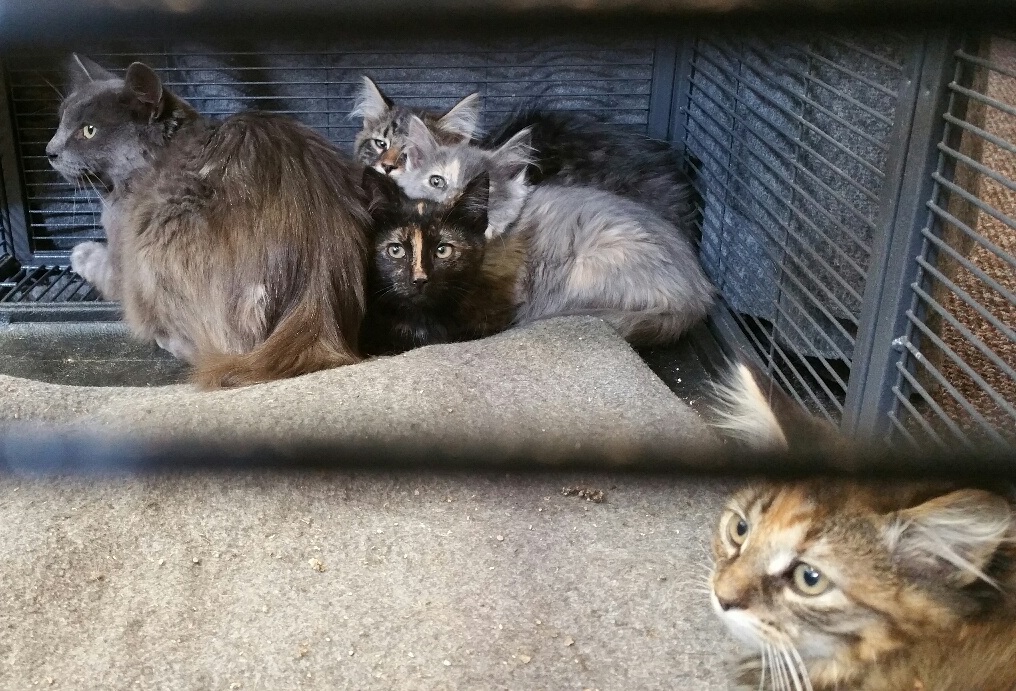 SCARS focuses on the rescue of cats and dogs in rural areas where there are limited or no options to help homeless pets. Thousands of homeless cats struggle for survival every day in urban and rural areas of Alberta. Rescues like SCARS are contacted everyday with urgent pleas to help them. The worst part is that this problem is easily preventable through responsible pet ownership which includes spay and neuter.

We hope sharing this story will create some much needed awareness about the plight of cats and inspire people to help them in their community. The City of Edmonton alone estimates it has over 65,000 homeless cats.

In early July 2018, a petite feral cat gave birth to a litter of kittens. This mom’s only wish was to feel safe and have the ability to feed and protect her babies. This is the story of Momma Grey and her kittens, Lexie, Meredith, Luna and Max.

The lucky few find their way to rescue

September 7 was garbage day in a northeast Edmonton neighbourhood. A SCARS volunteer was shocked to notice some kittens playing near some trash bags at the end of her street. The feline family scurried under the fence as she approached. She knocked on the home owner’s door.

The lady who answered was relieved that someone wanted to help. The feral kittens had been born in her back yard. Her children has been giving them milk, but she was unable to catch them and the family was allergic. Animal Care and Control had picked up a deceased kitten just two days earlier, but they weren’t able to help remove the others. She would need to find a way to do that herself.

Within 24 hours, the SCARS volunteer with help from a friend caught mom and all four kittens using humane traps. Their fear of humans was strong, but their hunger was greater. Because Momma Grey was feral, she was health checked, spayed and microchipped, and adopted to a barn home where she would be fed, sheltered and supervised. 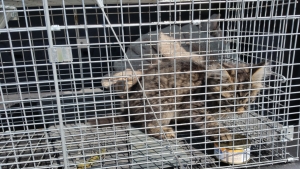 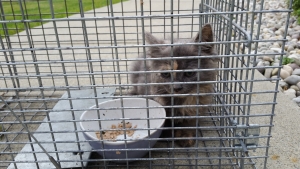 The journey to tame the wild kittens had begun. They appeared to be 8 to 10 weeks old and were no longer nursing. They hissed at their foster mom at first, but were happy to have a warm place to sleep and a full belly. She was surprised at how much they ate and wondered how they had managed to survive this long on their own.

Taming them involved wrapping them in a blanket with just their heads poking out, and holding them a few times each day. She was pleasantly surprised that, once separated from mom, although still fearful they never showed aggression. She spent lots of time cuddling and talking to them. Before long, the blanket wasn’t needed and some of them began to purr when held.

All of the kittens instinctively used their litter box from day one, and soon felt safe enough to start playing with toys and each other. Their eyes melted her heart. They were soft and sweet; so innocent and vulnerable. She had believed she was more of a dog person until she fostered these kittens. Her co-worker bought her a “cat mom” mug because she was talking about them so much at work!

It was hard for their foster mom to say goodbye. She will remember them always. Getting updates from their new homes is a surprising comfort and a wonderful gift! 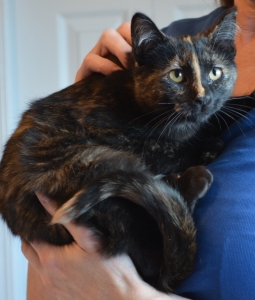 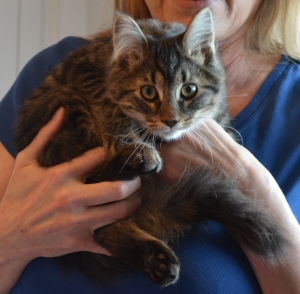 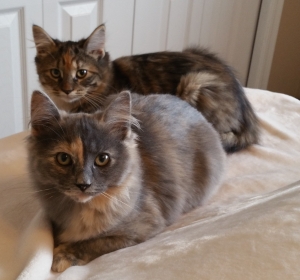 Look at Us Now

Here is an update from their adoptive homes!

Lexie & Meredith (formerly Mable and May)

These kittens were adopted together and are getting more comfortable every day! Their new mom, Heidi, has this to say about them…

“We started out by settling them in a safe spot with a bed, food, scratch post and litter box. May came out briefly from the crate to eat, but Mable was still too afraid. At first, we let them see, but not meet our other pets.

Since then, the kittens have been doing well.  They are sometimes still a bit shy of us but definitely getting more settled. Mable is a little wild one. She plays hard and is very hard to catch at bed time. Watching the two of them run and play is super cute and fun. Kalyna even had Mable purring. They are getting used to the sight of the dog. Our female cat is interested and not hissing and the kittens do not hiss at her.  The male cat however, is still not too happy. He growls and hisses everytime he sees them and sometimes even when he doesn’t. This was expected, though, with him. Kal and I are going to work on having them all out together!” 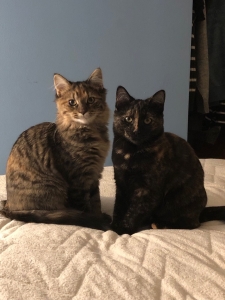 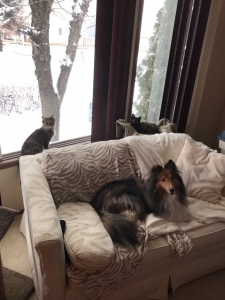 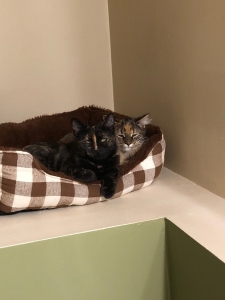 Max kept his name and was adopted to a home that already had a resident cat. His new mom, Moneeka, says…

“It took Max about two days to get used to us. We are so big when compared to his size. When Chad and I were sitting or sleeping he would come towards us, but once we stood up he would run away as if we were going to hurt him.

Our resident cat, Maya, still hisses at Max once in a while (but not as much as she used to). They chase each other but Maya is still keeping her distance.  I’m hoping they will soon be best buds!

Max is such a cuddler, and I love him for that. Every time I pick him up (which is quite often), he purrs and really enjoys it. Our favourite time is cuddling on the couch watching TV or me scrolling through my phone. Although he doesn’t like it too much when I’m on my phone because it seems to take away the attention from him. He lets me know politely to put the phone away.” 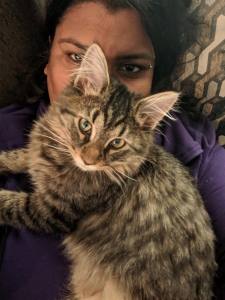 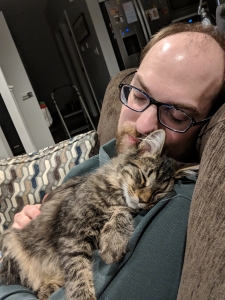 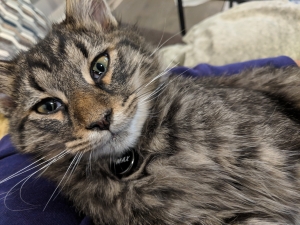 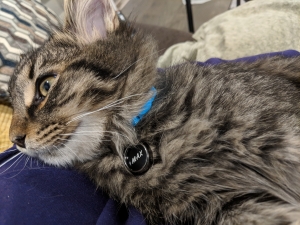 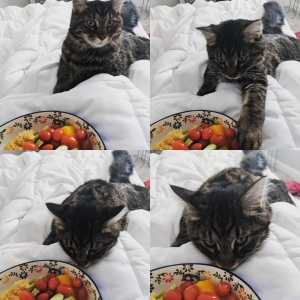 Luna was adopted to a home that already had a resident cat. Her new mom, Marian, kept her in a bedroom until they got to know each other. Once Luna felt safe, she introduced her to the resident cat and allowed her access to the rest of the home. Marian says…

“Luna feels safe to come out of my bedroom more and more. She will still start to run if she hears a noise she is unsure of, but she will come back when I call her name and tell her she’s so brave! Luna and Clyde are “super” best friends. They play so much and so well together. They bump heads when they first see each other and Clyde has even started to groom her. It’s adorable and makes me so happy that they are getting along so well.” 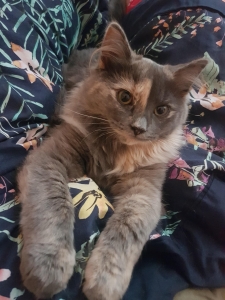 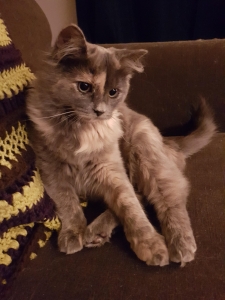 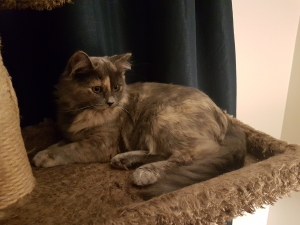 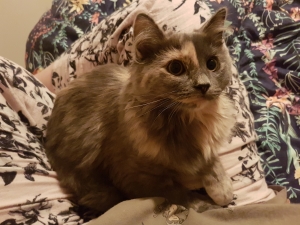 Homeless cats are a tragedy that goes largely unnoticed

Some cats become homeless after accidentally escaping their homes but many are intentionally abandoned. Because of the secretive nature of feral cats, their struggle goes largely unnoticed. Cats are still widely seen as disposable or people believe they can care for themselves… they are not, and they cannot.

If cat owners don’t provide their pets with license tags, microchips or tattoos, lost cats rarely find their way home again. The City of Edmonton is only able to return 16% of found cats to their owners.

If cats are not spayed or neutered, they contribute to the growing numbers of feral cats that suffer in Alberta. Free roaming cats are at risk of being hit by vehicles or predated by wildlife. They starve and freeze during our cold winters or might be tortured and killed by cruel people. They are also caught in traps intended to kill wildlife and they catch diseases or suffer from parasites such as ear mites and worms. They can also cause property damage and kill birds. Cats are not wild animals. They are dependent on humans. Without human care, a tragic end is inevitable and it often includes suffering.

Cat overpopulation is a huge problem in Alberta. The suffering is real and happens every single day. SCARS currently has dozen of cats and kittens in care and continues to get dozens of requests to help more. It’s heartbreaking because this problem is so preventable.

Here are some ways you can help: