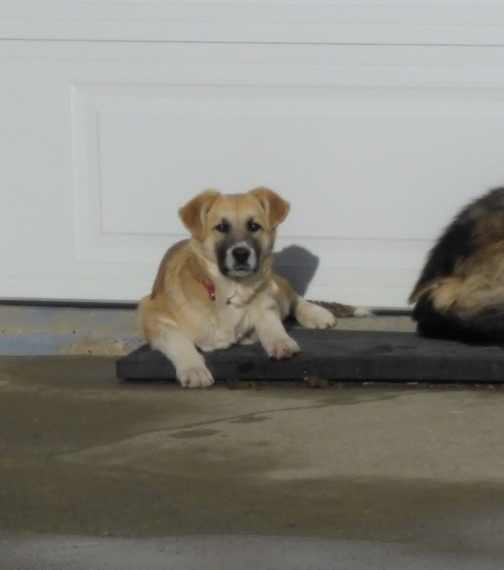 Hello SCARS, My name is Starry (formerly Elena).  I’m the cute one on the left.  Beside me is my big brother, Sarge.  He’s pretty cool.  Sarge said that he was from Scars too, so we were meant to be together.  I was brought to my new home in January when I was quite young but have a big brother and a big sister, Sheila, to show me around.  I was introduced to really large creatures that scare me.  They smell funny but Sheila told me that they are called horses and that they make dessert for us.  She showed me which dessert was the best to eat.  She said that she was a culinary expert.

I was also introduced to other creatures which were smaller than me.  I like that because I am faster than them but I can’t climb trees like they can.  When I get too close, they make a funny noise like a tire is losing air, so I don’t know if they are sick or have gas.  Sarge said they are called cats and squeak when he picked them up but he is no longer allowed to pick them up and told me not to either.  We are only allowed to sniff them.  He said something about them claiming to be the masters and our Mom and Dad were their servants.  They are silly creatures.

My Mom and Dad are fun because they are always outside.  They always pet us and the horses and the cats and give us treats when we listen.  We are allowed to run and play anywhere we want as long as we stay in our fence.  It takes me a long time to run around the entire fence, and when I do, I am exhausted!

I am so happy to be here and look forward to getting bigger so I can run as fast as Sarge.  He chased a moose out of the yard!  All I did was stand on the deck and bark.  I wasn’t big enough to run through the deep snow, like Sheila and Sarge did.  One day, maybe I can chase a moose out of the yard.  Sarge says that we have to do that to protect Mom’s fruit trees.  I don’t know what a fruit tree is but he said that things fall off of them and taste really good.  I can’t wait to try them.

I am so happy that my foster mom found my new parents to take care of me in my forever home.  Foster parents are so cool. 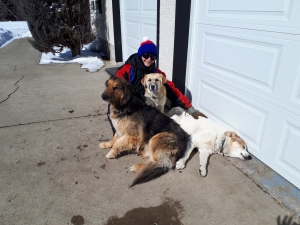