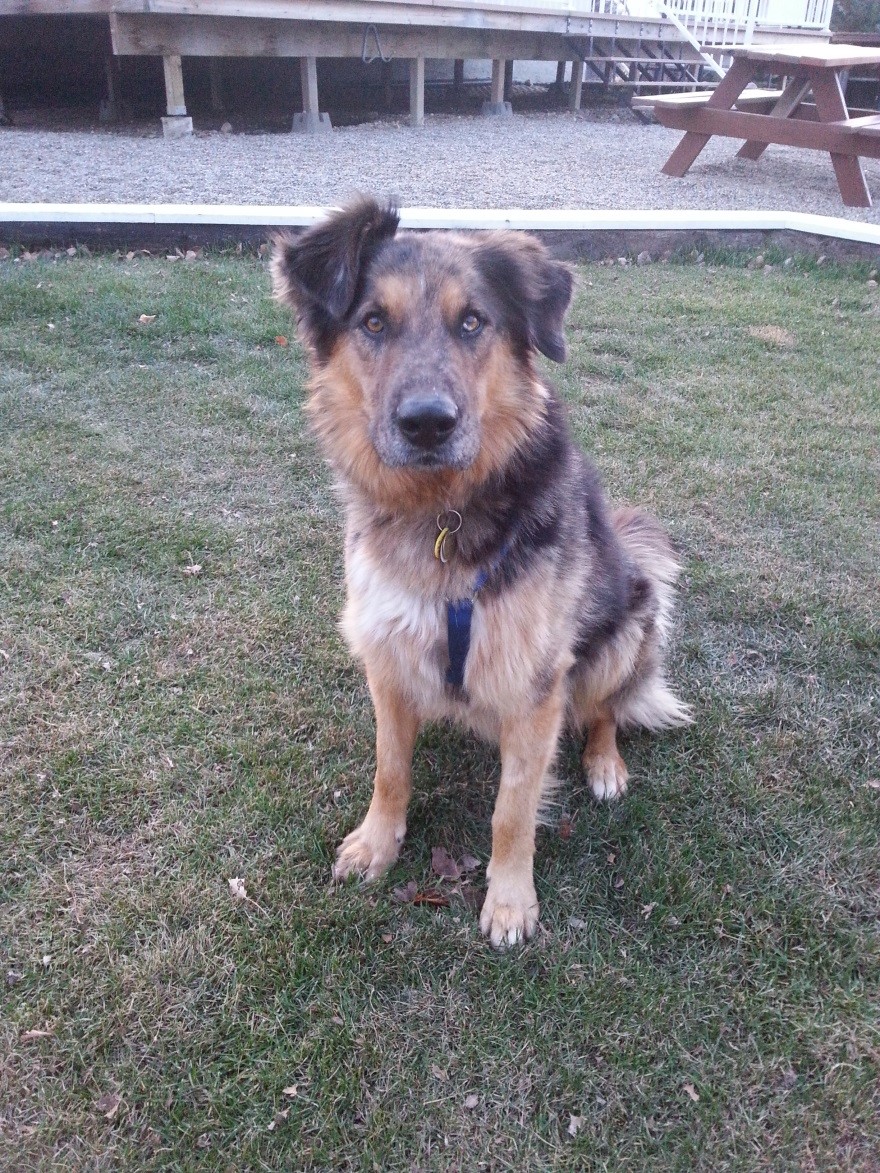 It was a dark and stormy night…Oops, I can’t write that because I’m not a Beagle.

I am not sure where to begin my story so I’ll start when I was placed in a foster home in 2015.  I don’t know what that means but a really nice lady took care of me.  There were a bunch of other dogs there and we were in our separate yards but sometimes we were allowed to play with each other.  I really liked that.

I didn’t want them to put a collar on me and it scared me so much that I shook.  When they put a harness on me, I didn’t like that either.  You see, when I was a puppy, I was kept on a chain because I wasn’t fixed, but I didn’t know that I was broken.  That’s why I don’t like collars or harnesses.

Then one day a man with Viking blonde hair came to visit my foster mom. I didn’t know what colour Viking blonde was because to me, it looked grey.  He was with a woman who had long brown hair.  They brought two dogs with them.  One of the dogs was a big white dog, taller than me!  Her name was Sheila. The other was a stocky black dog. Her name was Anjing.  Personally I think she was fat.  Although, after being around her, I realized that she could run faster than me, so I said she was big-boned instead.

I was placed in a cage in the back of a truck and when the truck stopped and Sheila and Anjing jumped out, my cage was lifted onto the ground. The door opened and I ran out. Where was I?  What was this place called?  I tried to ask Sheila and Anjing but they ran beside the house and drank some water and then ran past the house. I followed them and saw four really big creatures.  Sheila said that they were horses, but since they were so big, I decided to stay away from them for now.

The man and woman walked along and kept saying a word. I didn’t know what it was at first but then realized that when they said it, they looked at me. I think that they were trying to tell me my name. They kept saying “SARGE” and later on I found out that my actual name was Sergeant but I have a pet name of “Sarge.”  Sheila said that I have a pet name because my new Mom and Dad really love me.  I also learned that Anjing’s pet name was Annie. Sheila said that she is a lovely lady dog and doesn’t need a pet name. I saw a small white creature in the yard and went up to it.  I thought it was a toy and when I grabbed it to take it with me around the yard, my mom said “No!”  Her voice scared me so I dropped the white creature and it ran away.

Sheila said that it was Mom’s “Serious voice” and when she used it, we had to listen.  Sheila also told me that the white creature was her cat and that the white cat sleeps on her to keep her warm in the winter. I don’t know what a cat is but I liked the fact it squeaked.  I found out that the other toys in the yard squeak when I grab them.  Although, I must say that the other toys don’t move unless my mom and dad throw them.

Oh and one of the things that I forgot to mention was that in addition to getting to eat twice a day, we also get dessert. Remember the horses that I mentioned earlier?  Sheila said that they give us treats too. She calls them road apples. She eats them so I tried them. They are so good. Sheila never lies to me and I am happy she told me about this secret.  After I ate them though, I went to lick my Dad’s face and he quickly moved away. He told me “No” so I think he might be allergic to them and that’s why he doesn’t want me licking his face after I eat them.

Sheila and Annie had signs on their houses and they said that it was their names.  Then I looked and saw that I had a sign on my house too.  It said, “Sergeant.”  Sheila said that I would be living here forever with them.  She said that she and Annie call the place, “Dog Utopia.”  I don’t really know what that means but what I do know is that I am very happy.