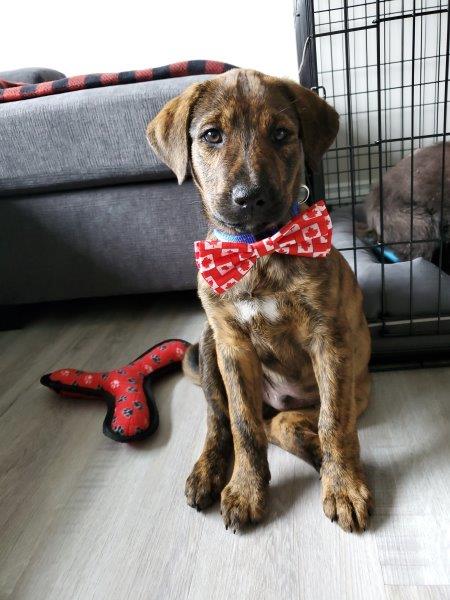 Hello SCARS, Thank you for bringing Hudson (formerly Ganges, one of Rio’s river pups – who is technically still a river) into our family. He has made such an impact on our lives in the short time we’ve had him and has been a huge part of my PTSD recovery. He’s there for me always. On the good days and bad, giving French kisses, cuddles, affection (sometimes a little too much and a tad inappropriate but he is still learning) and being an amazing overall distraction. On walks, I am no longer hypervigilant because I am too busy focusing on all the things Hudson attempts to put in his mouth. He forces (he likes to think of it as encouraging) me to be more social as he wants to say hello to all the humans and their furry companions. I’m able to be more present, be more mindful of the here and now versus the past or worrying about the future.

Our tiger, as a number of dog lovers have affectionately called him, loves the outdoors and LOVES snow! He loves going to daycare, but hates the car ride to get there – or anywhere for that matter. Fingers crossed he outgrows getting carsick or we will be keeping a supply of pee pads longer than we anticipated (works great for drool and other messes too). We took him on a road trip to the mountains and he was super popular and enjoyed exploring. He also enjoyed living the life of luxury in hotels. Hudson loves walks, going to the dog park, and his toys – we think he secretly prefers the cats’ toys though. Huddy already has a few girlfriends that he can’t seem to get enough of. He loves digging in the backyard and eating all things made of wood; his palate seems to lean towards lattice though.

He has thoroughly enjoyed welcoming foster fur sisters and fur brothers into our household. He tells us which ones are his favorites and is always sad when they have to leave to go to their furever families. I’m not sure who has a harder time saying goodbye, Hudson or his moms. He always spends the next couple of days looking around the house for his friends, triple checking their hideouts and tries to convince us to keep at least one kitten and one puppy, as they seem to like him better than his permanent feline sisters.

He loves to lounge on the recliner – or any bed, for that matter – snoring up a storm. He thinks he’s a lap dog…even though he’s pushing 60 pounds and still growing. He has a healthy appetite which is great for learning new tricks. He gobbles up bully sticks like they’re candy. Drop is still a work in progress – he thinks we are going to steal his toys (for the record, we’re not). Moms are thoroughly amused by the crazy zoomies he gets. The cats just watch on, slightly embarrassed, and a touch concerned for his well-being.

Because of Hudson, I have an important reason to get out of bed. A purpose. He saved me. So, thank you to Hudson and SCARS for rescuing me.

In case you’re curious (as everybody asks what he is), according to the Embark DNA test we did, his dad was not a Mastiff as originally suspected – he was likely Rottweiler. Hudson is 28% Rotti, 25% American Pit Bull Terrier, 11% Collie (takes after his mom too), 11% Redbone Coonhound (which is where he likely gets his brindle pattern from), 10% Lab, and some Bloodhound and American Staffordshire Terrier just to finish up the Heinz 57 mix. Moms and I would love to hear how my siblings and my mom are doing (for whoever ended up with Rio and the rest of her river pups). 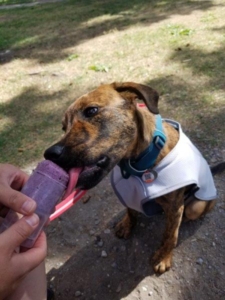 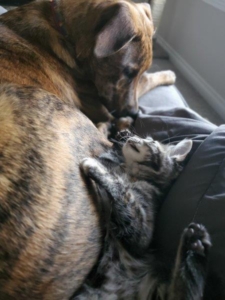 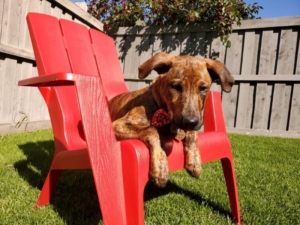 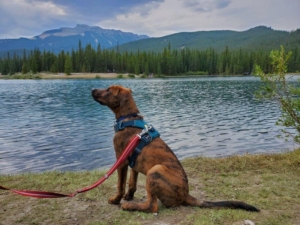 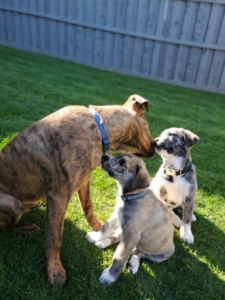 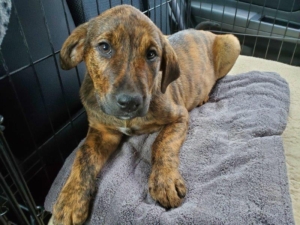